NOCN Group offers a wide range of services including regulated qualifications, EPA for apprenticeships, Job Cards in construction, Access to HE Diplomas, bespoke accreditation and educational and skills support training.

You will find out more operational detail on the implications of COVID19 for each of these services, including advice for students and centres preparing for external assessments, through the following links:

Please note that NOCN will be following the guidance issued by the ESFA, IfATE, Ofqual, CCEA, QAA and Qualifications Wales, and will update our customers as things change.

If you have any concerns or would like to discuss the impact on your centre, apprentices or learners please contact us on nocn@nocn.org.uk or 0300 999 1177 (Option 5).

Working to support our valued customers

You will be aware of the various Government and World Health Organisation (WHO) announcements and official advice over COVID19.
The situation is unprecedented and has been continually changing. With colleges and schools now closed and the country in effect ‘locked down’, other than essential services, we will endeavour to continue to support you, your apprentices, learners and card applicants through this difficult period.

We support Ofqual’s statement that the most important principle is fairness to all learners and apprentices, not only for those being assessed now, but also for those assessed before COVID-19.

All our staff are working from home, so we are still offering front line support, through telephony, email and web chat as usual.
Certificates for regulated qualifications and cards are being issued to centres in the normal way.
We aim to provide as full a range of our services as possible, where these can be delivered remotely, and we can use remote or recorded assessment methods, whilst maintaining the integrity of the assessment.
All face-to-face appointments for approval visits, External Quality Assurers, and external assessments have been suspended until training centres reopen and normal business resumes.
We are providing digital on-line support, including offering WebEx interviews, developing online invigilated exams in place of physical papers, and digital content support.

Best wishes from all at NOCN to you our valued customers. We hope you all remain safe and well.

Tom Burton, Head of Assessment reflects on his time in America at the Transatlantic Apprenticeship Exchange Forum. 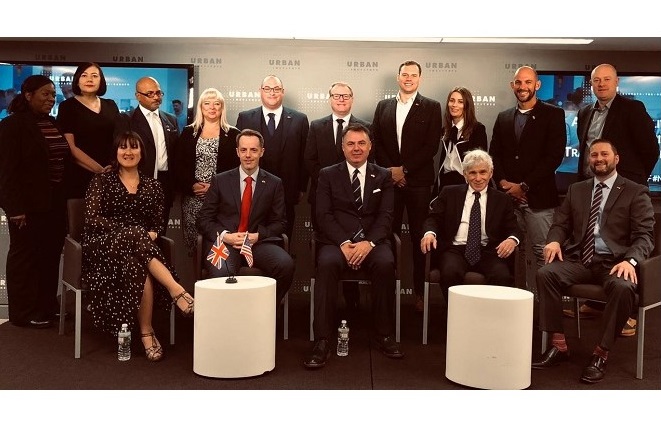 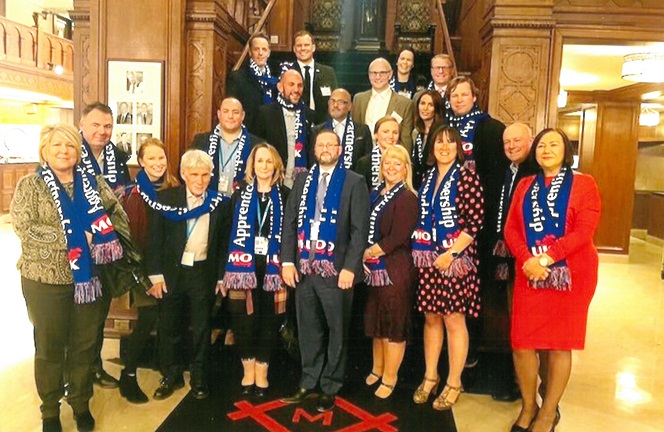 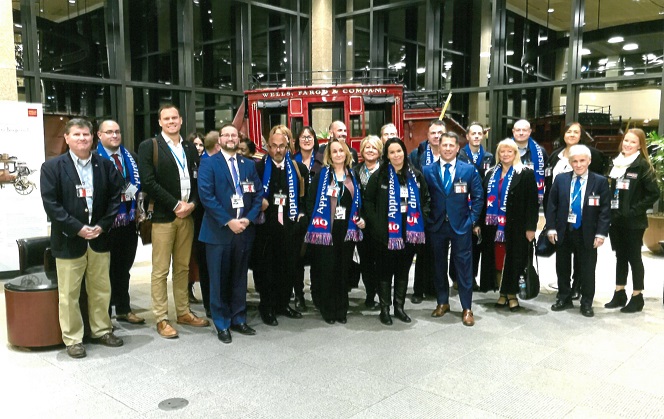 When our MD Graham Hasting-Evans, first offered me the opportunity to travel to the USA, to promote NOCN and the wider Further Education sector, it ticked one of the boxes on my bucket list! Having obsessed about American and the US culture for the last 20 years, I have struggled somewhat to hide my excitement over the last couple of months.

Fast forward to stepping off the BA flight, accompanied by NOCN Group Deputy MD Jan Richardson-Wilde and Head of International Business Development, Stephen Ram Kissun, finally arriving in DC and our St Thomas Circle Hotel and what would be our base for the first element of our trade mission.

The use of the word and brand “Apprenticeships” can mean a very different thing in the US, unlike the protected definition in the UK, separate states have some very differing models, however as in the UK, the US faces similar productivity and skills gaps within their economy.

The skill trades, based in engineering and construction attract the main headlines and focus of the US Apprenticeship brand, but areas such as digital, financial services and hospitality have seen some development, but options for both young people and those “re-skilling” are limited.
The TAEF, has developed relationships over the last number of years, fostering a two-way partnership, which has already seen two UK-Style, Independent Training Providers establish a foot hold, in the form of Franklin Apprenticeships and TranZed Apprentices, both taking parts in elements of the TAEF mission.

The TAEF’s link with DC, has been a growing since FAB CEO Tom Bewick first struck up a relationship with Dr Robert Lerman of Washington’s Urban Institute, a not-for-profit, economic think tank, which focuses on shaping policy and informing US decision makers.

As part of NOCNs sponsorship of the TAEF, I was asked to hold a lecture at the Urban Institute, which included speakers such as; Sir Gerry Berragan of the UK’s Institute for Apprenticeships, Dr Lerman, Tom Bewick, Maryland Senator; Jim Rosapepe and Missouri Workforce Development Director; Mardy Leathers.

The focus of my lecture was a high-level view of the English Apprenticeship model, following the recent reforms and the Richards review. This concept of employer designed Standards and Independent End Point Assessment, has been the model which has chimed most recently with our US counterparts, when looking to reform parts of their own system.

Before heading out of the UK, the nature of the DC audience was known. What I did not quite realise was that the opportunity to address the Urban Institute also came with one to address the world via a live YouTube stream - although not quite breaking the Internet, I was amazed by the tweets, re-posts and links people have shared.

Susanna Lawson and Mardy Leathers – The TAEF’s Lewis and Clark

I have had the pleasure of knowing Susanna Lawson, the Director and Co-Founder of the fantastic OneFile E-Portfolio system since my assessing days.

Susanna and Missouri Director of Workforce Development, Mardy Leathers met in the back of a New Orleans taxi, whist they both attended a US apprenticeship conference, and their subsequent tale, is almost as fascinating as those of Lewis and Clark and their own expedition west.

Twitter, and its power of connection, is the modern-day equivalent of Lewis and Clark’s map of discovery. Susanna and Mardy began sharing thoughts and expertise via the platform, culminating in Mardy and his team generously hosting the 2018 TAEF delegation in the city of St Louis, Missouri.

Having considered many other models including Germany, Switzerland and Canada, the Missouri Director with the support from Susanna Lawson and Tom Bewick decided that the UK’s apprenticeship model, was the one which offered the most comprehensive and robust method of developing their state workforce. It will help address the state-wide issues, of skills gaps, productivity lag, ageing workforce and general economic progress, by developing the state’s apprenticeship programme.

FAB CEO, Tom Bewick and his Wikipedia style knowledge of UK/US history, constantly impressed during our visit. His closing speech during the final night’s Dinner at the Hawthorn Foundation saw Tom Bewick reference a new meaning of a “Special Relationship” a term first coined publicly by Sir Winston Churchill, during his 1946 address in Fulton Missouri.

Mid-Westerners are famous for their hospitality and welcoming nature, Mardy and his team, supported by various Chamber of Commerce members, Senators, a former state Governor and business leaders, showed the TAEF the very best of St Louis.

Trade missions, such as these are however often judged on the return on investment they provide, the Pounds and Dollars stacking up against the time and resources used to venture west, as Lewis and Clark once did. However, what has organically grown from a simple and honest discussion, has now seen the initial stages of a knowledge Eco-System laid down - an Eco-System which shares best practice, develops expertise and improves skills, to forge a way forward between the two countries.

So why the title? I took initial inspiration from the 1987, John Candy and Steve Martin movie, during my way out to the US, I laughed several times via twitter with Mardy Leathers, referencing the travel-based caper as we moved from Yorkshire to Washington DC. However, the references were soon ringing in my ears as our travel plans began to unravel. The evening of Wednesday 14th, saw six inches of snowfall in just 8 hours across the St Louis area. In what would have been dubbed “snowmageddon” in the UK, the St Louis authorities were ploughing streets and airports as soon as the first flakes dropped.

It was not the snow however, that was that catalyst for me giving this blog its title. Our St Louis to Philadelphia flight was affect by a malfunction on route to St Louis, causing first 4 hours of delays followed by eventual cancellation. I have never seen chaos like when a flight is cancelled in the US – I stood in a line for an hour, attempting to re-book on later flights. Eventually we decided to call it a loss and reschedule our connections for the following afternoon.

Cut to a 24-hour layover in a St Louis Holiday Inn, with the NOCN delegation, Susanna Lawson from OneFile, Simon Ashworth from AELP and Dr. Lucy Dunleavy from LearnBox. Wine and Beers were the order of the evening following the seven-hour delay.

Eventually I made it on the 21:14 flight to London, followed by tube and train journey north to Scarborough to meet my family for a weekend by the coast two days later than planned.

Oh, and just to finish off the full Plane, Trains and Automobiles experience, my suitcase is still stood somewhere in St Louis, never making it on the flight to Philly and London.