NOCN Group offers a wide range of services including regulated qualifications, EPA for apprenticeships, Job Cards in construction, Access to HE Diplomas, bespoke accreditation and educational and skills support training.

You will find out more operational detail on the implications of COVID19 for each of these services, including advice for students and centres preparing for external assessments, through the following links:

Please note that NOCN will be following the guidance issued by the ESFA, IfATE, Ofqual, CCEA, QAA and Qualifications Wales, and will update our customers as things change.

If you have any concerns or would like to discuss the impact on your centre, apprentices or learners please contact us on nocn@nocn.org.uk or 0300 999 1177 (Option 5).

Working to support our valued customers

You will be aware of the various Government and World Health Organisation (WHO) announcements and official advice over COVID19.
The situation is unprecedented and has been continually changing. With colleges and schools now closed and the country in effect ‘locked down’, other than essential services, we will endeavour to continue to support you, your apprentices, learners and card applicants through this difficult period.

We support Ofqual’s statement that the most important principle is fairness to all learners and apprentices, not only for those being assessed now, but also for those assessed before COVID-19.

All our staff are working from home, so we are still offering front line support, through telephony, email and web chat as usual.
Certificates for regulated qualifications and cards are being issued to centres in the normal way.
We aim to provide as full a range of our services as possible, where these can be delivered remotely, and we can use remote or recorded assessment methods, whilst maintaining the integrity of the assessment.
All face-to-face appointments for approval visits, External Quality Assurers, and external assessments have been suspended until training centres reopen and normal business resumes.
We are providing digital on-line support, including offering WebEx interviews, developing online invigilated exams in place of physical papers, and digital content support.

Best wishes from all at NOCN to you our valued customers. We hope you all remain safe and well.

What we learned in 2018: an eventful year for FE and skills

As part of our lookback at NOCN’s year, we have reviewed some of the major news items and highlights for FE and skills, together with our take on them. 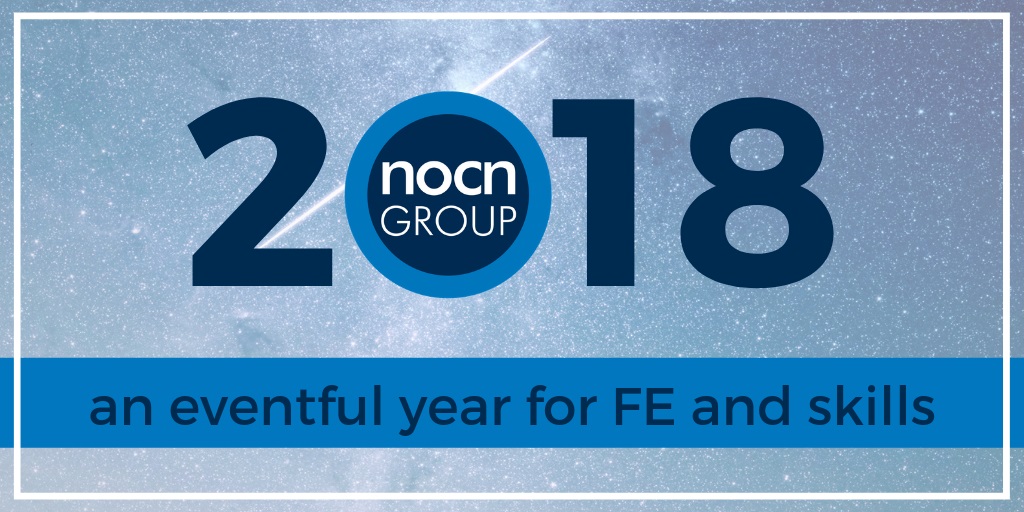 And 2018 has been a highly significant one for the sector, with several major milestones. While not all of them have been positive, we greeted each with a renewed determination to continue to promote and support the UK’s crucial skills drive and apprenticeship project.

NOCN says: While lower than anticipated uptake was widely reported this year, what other project on the scale of the UK’s national apprenticeship drive doesn’t have problems? And there is near unanimity among economists, decision makers, media commentators, academics and employers that apprenticeships are not merely a major force for good, but fundamentally vital if the UK is to remain a major global commercial force.

That is precisely why we are determined to keep the spotlight firmly on apprenticeships and continue to power the drive for increased uptake and the excellence of all colleges, employers and assessors who serve the learners.

NOCN says: We responded robustly by restarting the conversation about the nation’s productivity with a major new report, Skills to Drive a Productive Society, written and researched in partnership with the Learning & Work Institute. In it, we outlined an inclusive National Skills Strategy that will boost productivity, improve literacy and numeracy and drive greater social mobility.

All this as most developed nations are improving literacy and numeracy - with industrial titans, China and India, churning out hundreds of thousands of STEM graduates every year. While it would be bad enough at any time, we are currently marching towards the uncertainties that Brexit will bring. It means we simply must up our game and increase productivity rates dramatically.

It was reported this year that a hugely impressive 76% of all general FE colleges are now ranked by Ofsted as ‘good’ or ‘outstanding’, while none are tarred with the lowest grade, ‘inadequate’. The figure is up more than 10% from 2016/17’s 69%, with more than twice as many colleges moving into grade one or two than tumbling from the top ranks in the most recent academic year

NOCN says: These results are yet more evidence of further education’s relentless progress towards universal excellence. We have always stressed the absolute importance of a solid academic bedrock for apprentices; despite the emphasis on work placements and real-world experience, most vocational learners must have classroom disciplines and benchmarking to validate their progress. In turn, they can only receive the service and attention they deserve at an Ofsted rated college.

It was recently announced that the first T Levels – in construction, digital, education and childcare – which were set to begin next year, will not now come on stream until 2020. Meanwhile, The Department for Education has delayed full implementation of the new qualification until after 2022.

Delays to the vocational equivalent to A Levels were attributed to concerns raised by senior civil servants. It is set to be promoted in a new campaign next year that will “ensure that parents, teachers, students and the wider public knows about T Levels and where they fit among other choices after GCSEs."

A short animated video introducing the new qualifications has been shared on social media. It describes T Levels as, "the qualification that will allow your career to take off", detailing “a three-month industry placement where you can learn the skills you need for your dream job."

NOCN says: We see the introduction of both the trailblazer apprenticeships and the proposed T-Levels as absolutely vital, particularly to the construction industry. They have the potential to be the best policy changes tabled for the sector in more than two decades. If we’re going to close the gap in terms of productivity and skills, we’ve got to up our game in terms of apprenticeships and related technical education, without sacrificing health and safety,

However, the execution of the initiatives is seriously flawed because the Department for Education has not engaged properly with the sector, which means that they have not been embraced by employers and other stakeholders. That is why their rollout was put back.

As a result, policies that could do so much to help construction are not being allowed to deliver on their promise – and we don’t blame the industry for that.

The government estimated this year that 158,000 new construction workers will be needed in the UK by 2023. It announced that new ‘hubs’ embedded at live construction sites will train up thousands of workers and help tackle skills shortages in the industry.

NOCN says: Our support for the construction sector’s ongoing skilling continued apace in 2018, sealing our position as its largest awarding organisation. Following last year’s acquisition of the Cskills Awards, we bought CITB’s Construction Plant Competence Scheme (CPCS). The move boosted CITB’s reforming Vision 2020 programme, to better meet the demands of British construction firms. With our support, it will take on a more strategic and influential role - focusing on securing the right training mix, high standards and quality assurance, building employer confidence in the market.

This acquisition builds on our education and skills investment in the sector. After successfully integrating Cskills Awards to become the premium construction qualifications brand, we now welcome CPCS, which is set to widen our product range further.

Skills, learning and experience will always be fundamental to the wellbeing of individuals and organisations - from the nervous novice apprentice standing on the threshold of their working life, through to UK plc’s progress in increasingly uncertain times and challenging global markets.

That is why we will always be on hand to support the vocational, practical training of apprentices of all ages, across all sectors, as their numbers rise to plug the skills and productivity deficit that currently restricts the nation’s progress.

With that in mind, next year will see even more exciting developments and vibrant improvements to our offer, so watch this space!